How to Start a Female Betta Sorority Tank

In this topic, will be explaining how to successfully keep a Female Betta Sorority, the basics, how to, setting up, etc.


First and foremost, you may ask: "What is a Betta sorority tank?". A Betta sorority is a tank full of female bettas that (Hopefully) can live in peace together. I bet your thinking, “But I thought when Bettas are together, they fight?”. You see females are generally more peaceful / passive than male Bettas, they can in most cases be kept in set ups with multiple other female bettas & community set-ups (Unlike most males). Again, let me remind you that a Betta sorority tank has a 50/50 chance of being successful (Every betta has a different personality - it really just depends on each of the individuals bettas personalities if they can do ok with each other). I have found that, in most sororities, the female bettas form a pecking order and are able to successfully live with one another. Anyway, enough talk about a sorority, let's get on to the tank details.


For keeping a sorority, at least a 10 gallon minimum is recommended (Some may disagree though), preferably a 20 gallon aquarium minimum. Anything under 10 gallons will not work due to room and bioload issues. Why I recommend a 10 gallon is because in a sorority, you will need at least 4 - 6 girls or more (And a 10 gallon can hold up to 6 girls comfortably). Don't ever put just two or three females together, it won't work. You see, with two females, there will be one Superior female and one Inferior female - the Superior female will have the dominance of the tank most indefinitely attack the Inferior female and most likely kill her. With three, the two dominant females will gang up on the more passive girl and kill her given the opportunity. Four, I have had success with, but I would recommend that you start out with a higher number.

Make sure that you have a lid for your sorority as females bettas are excellent jumpers. I have had 2 deaths from Bettas jumping (Female) so far and it wasn't pleasant. From what I have looked at, it seems that females jump more often than males (Why I said is because with all that extra finnage, males don't really attempt to jump out of the tank as often as females - though this does not mean it isn't possible for males either).


I would as well recommend a light for the tank. It's more appealing to view your bettas with a light than it is without and the tank just doesn’t look as good without a light. Some lights, like fluorescent as well bring out the Bettas best color. Lights are a must if you plan on keeping live plants (And it depends on the type of plants you want to keep you might have to get more lighting or not). 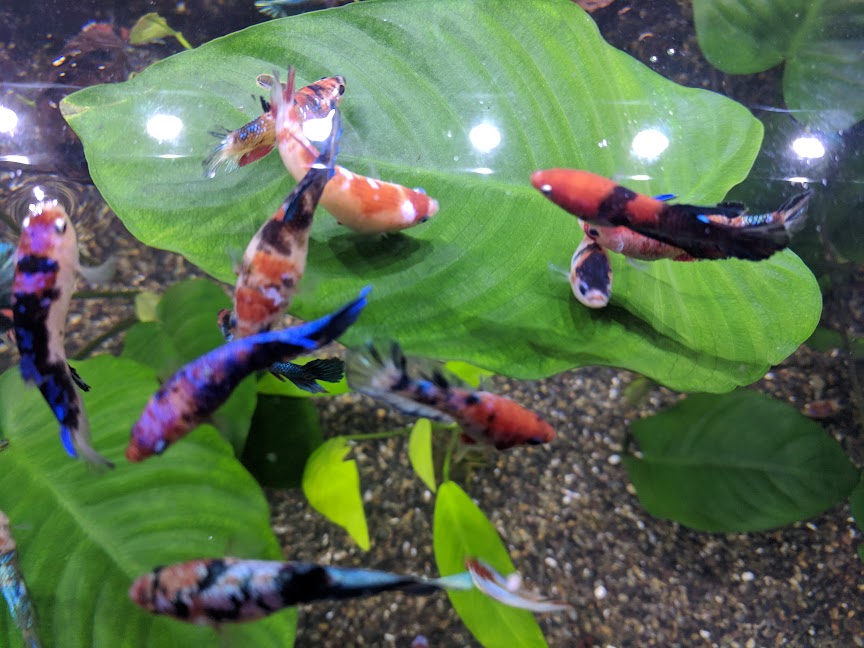 
Really any substrate for this set-up will do. You could either do sand, regular aquarium gravel, etc. But if you do decide to use sand, make sure that you pop the nitrogen pockets in the sand every water change because if not, it could be deadly to your females (And other fish as well). Just when doing the water changes, simply stir your fingers around in the sand. Or as an alternative, just buy some Malaysian Trumpet Snails (They bury themselves deeper than what other snails would and will pop the nitrogen pockets for you instead. If you plan on keeping the tank planted, don't bother vacuuming the tank, just do a regular water change.


I use black aqua soil in my 10 gallon sorority and the females don't mind it at all. The black makes the green from the plants pop more as well.


Now you will need to look for a nice filter for the tank, just like any other tank. The filter rules applies to this tank just as it does any other tank. Just in case you don't know, I will teach you. Generally you will be wanting a filter that turns over the water 8X - 10X the water volume and that equals the amount of GPH (Gallons Per Hour) required for the filter. So basically: 10 gallons X 10 = 100 GPH, 30 gallons X 10 = 300 GPH, 55 gallons X 10 = 550 GPH, and so on. I would recommend that you use 10X (I personally the most filtration I can get on a tank without a problem). So when choosing your filter, make sure that it you look at the GPH of the filter prior to purchase (It should be somewhere on the back or bottom or wherever). The only thing that you need to watch out for is if the flow is strong on the filter or not (Bettas are not very found of strong flows at all) - if your filter does have a strong flow, add some filter floss at the output (Put enough so that the flow is reduced, but not stopped).


If you plan on having no filter on your tank and daily 100% water changes a day, that's fine too. It's a lot of work, but I love that people are that dedicated to their fish. Just make sure to include plants in your tank because they work as a form of filtration by neutralizing all the waste your fish make, and making the water safe for your fish.


I personally recommend the AquaClear series for smaller tanks because they don't produce much of a strong flow and the flow is adjustable. I have an AC20 on my 10 gallon sorority and a AC30 on my 10 gallon Endler breeding tank and neither the bettas or endlers are bothered by the soft flow.


Another important need for a Betta sorority (Really any tank) is a heater. Bettas are a Tropical species and will always do better in warmer waters than cooler waters (Although they can survive in cooler waters, again they are a tropical fish, would not be as comfortable and would have some health issues as well). If you plan on heating your tank simply by room temperature, that's your choice. Now, you will need to look for a heater that will be able to heat the tank up to 86 degrees Fahrenheit (As in some situations you may need it). A good general rule to choosing a heater is using the 50 watts per 10 gallon rule.


This is one of the most important things to focus on when keeping a sorority. Each of the females will need to claim their own territory or "home" that they can patrol around and hide in when necessary. There are many decorations to choose from, but I would recommend that you at least have a few caves and quite a few plants (Real or fake) in there with them. If you look to use fake plants, I recommend that you use silk plants so they won't rip the bettas fins (There are a few plastic plants that will work, but you will have to test the plastic plants before you put them in your tank. To perform this test, you will need to get a piece of panty hose and run it across the fake plant - if the panty hose goes over the plant just fine, the plant is safe, if it snags, it will most likely do the same thing to your bettas fins).


If you plan on making your tank planted, go ahead, it'll make it seem more natural for your Bettas. But if you do plant the tank, make sure that you meet the requirements of the plant you have.


I have live and plastic plants in my sorority currently as well as a few caves and my bettas love it. I plan on removing the plastic plants soon and make it all real plants.


Picking and Adding your Betta Females:


First and foremost, before you add any females to your tank, make sure that the tank is cycled and ready for their introduction. When choosing your Bettas, get them from a good source. If you can, try and get sisters as they would have been together since they were hatched and would be used to each other, however this is not always possible. Also, make sure that they are generally all the same size, none bigger and smaller than the others.


Now, adding the female Bettas is not the same as adding other fish, like 2 to 3 at a time. You have to add the Bettas all within the same time, if not, you would most definitely have to rearrange your tank and try to introduce them together again. Now, the technique that I am about to tell you was picked up a long time ago from another longtime fishkeeper and always has worked for me. You start with your most passive female, put her in the tank and give her 15 or 20 minutes to nose around and check things out. Then you add the next least aggressive female and watch them closely, always being ready to pull one out immediately if things get too rough. A small amount of fin nipping and body slamming is to be expected, but if you see one aggressively attacking another then it is time to make other arrangements for one of them. Continue to add your females, one every 15 to 20 minutes in the order of most passive to most aggressive with your most aggressive Female going in last.

Watch the tank carefully the next week or two. At first, the females will be chasing and nipping each other, but it shouldn't be too bad. Eventually, they will most likely form a pecking order among themselves and all the fighting will subside. That pretty much covers all the basics to keeping a female Betta sorority tank. But always have a back-up plan in case that any female Betta you have is too aggressive to be kept in a sorority and must be kept by itself.


Coast Gem USA carries a wide variety of female Bettas for you to start your own Sorority tank. And always remember to have fun, Thanks!

Subscribe to our email list today and stay up to date on what's happening, get the latest deals & special offers, and receive occasional VIP emails with Inventory Sneak Peek and Pick of the Litter purchasing.

Join our email list and stay up to date on what's happening, receive special discounts and offers as well as our VIP Inventory Sneak Peek and Pick of the Litter emails!

By clicking enter you are verifying that you are old enough to consume alcohol.

Your cart is currently empty.